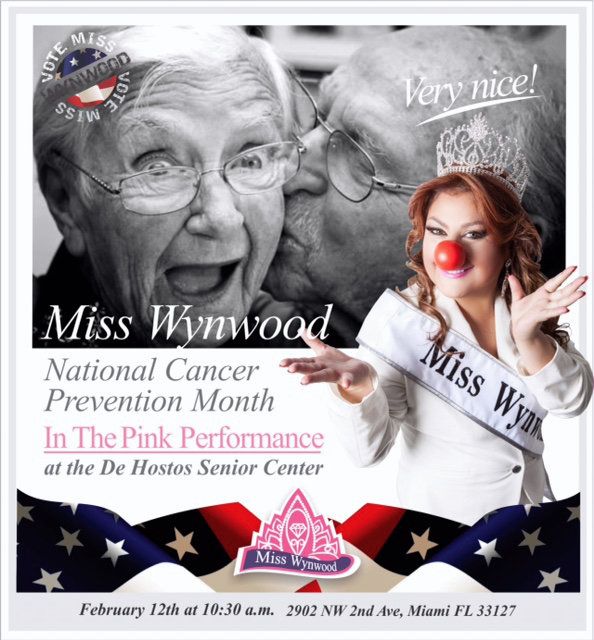 To mark National Cancer Prevention Month, South Florida-based artist, Nina Dotti, today announced she will be staging a public service performance on Friday, February 12th at 10:30 a.m. at the De Hostos Senior Center in Wynwood. The event’s goal is to help focus attention on the need to make cancer screening programs, care and patient support more accessible to underserved populations.

Dotti is making the appearance in her capacity as “Miss Wynwood,” a character she created in 2014 as part of an ongoing performance project in which she plays the role of a Venezuelan–American beauty pageant queen who becomes Wynwood’s Mayor tasked with improving the neighborhood’s profile in the wake of runaway gentrification.
This past November, “Miss Wynwood” declared herself a candidate for the 2016 U.S. Presidential election with the mission of amplifying attention on the need for new visions of leadership to address the social, cultural and economic disparities confronting America’s marginalized communities.

“Aging is the single biggest risk factor for developing cancer,” Miss Wynwood says. “Elderly cancer patients often experience a loss of independence and feelings of low self esteem. The hope is that through agencies such as the De Hostos Senior Center, older adults won’t find themselves alone and continue having access to social workers, resources, information and services to help cope with the problems and challenges of dealing with cancer treatment,” adds the beauty queen and presidential candidate who is also founder of the Fantastic Awesome Fabulous and Amazing (FAFA) Party, a Wynwood Arts District pioneer and publisher of The Wynwood Times.

Established in 1978, the De Hostos Senior Center has a long history of providing the local elderly population services ranging from free meals to transportation for medical treatment, recreational, cultural and social activities and a professional staff of social workers catering to their needs. But that is now set to change this coming May when the De Hostos Senior Center, in the heart of Wynwood, is scheduled to be razed by the gentrification wrecking ball.

“For the past 37 years our Senior Center has been the only place in the heart of Wynwood where the local elderly community has found a family environment and enjoyed three hot meals every day,” says social worker, Vincent Delgado, who serves as De Hostos’ CEO. “Now we are bringing in a psychologist to speak to our clients to help them cope with fears of being displaced”.

To bring attention to the plight of the De Hostos elderly patrons, Miss Wynwood has launched a “Pink Cross: Feeling Healthy and Happy” initiative and will be donating supplies to the Senior Center and individual gift bags to the people it serves.

“We want to speak to this aging audience not only about the importance of cancer prevention awareness but to also offer them help with dealing with the reality that the place they call home is now on life support,” Miss Wynwood says.
The “Miss Wynwood In The Pink,” performance on February 12th at 10:30 a.m. coincides with the Valentine’s Day Party at De Hostos Senior Center (2902 NW 2nd Avenue, Miami) sponsored by Scarlet Martinez, a representative of Humana Market Point. The event will feature live music, snacks and refreshments. The occasion also marks the 1st Anniversary of the “Miss Wynwood Day,”Observance, officially declared by Miami-Dade County Government during Presidents Day.