To explore politics from the performance.

From February 21 to 26 we can see Miss Wynwood's performance by the artist Nina Dotti in Booth E15 of La Juan Gallery at the JUST MAD art fair. 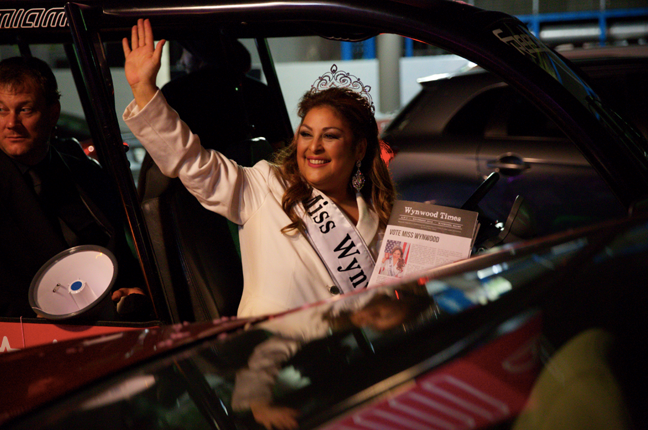 Part of the participatory performance Miss Wynwood will be present in booth E15 of La Juan Gallery with a photographic series, two videos, 3D sculptures, an installation, political posters, POP material and a publication edited by the artist that includes the experience of her performances.

With the character of Miss Wynwood, the artist Nina Dotti (Venezuela, 1968) through her symbolic participation in the electoral contest for the presidency of the United States against Donald Trump, a set of actions of a performative nature that intends to highlight various problems of collective interest.

Miss Wynwood is an anti-heroine who uses cheekiness, kitsch, humor, sweetened frivolity and exacerbated banality to put the magnifying glass on the ways of doing politics, human rights and citizen mobilization.

With her parody of the former miss who became mayor in Wynwood, and now presidential candidate for the FAFA party for the presidency of her country of birth, Venezuela, Nina Dotti brings together a series of works that go beyond the political to question and transform transcending the codes of traditional international politics and within the globalized world.

In JUST MAD we can see her step as "Mayor" of Wynwood (the cultural-artistic district of the city of Miami) until her "admirable campaign for the presidency of the United States of America" ​​and now also as a presidential candidate who wishes to lead the future of Venezuela and question the policy of the current president of the United States, Donald Trump, which includes the publication of a manifesto and the activation of public space to build an interaction between the campaign electoral apparatus and artistic practices.

About the artist Nina Dotti, born in Caracas (Venezuela) 1968, Nina Dotti (pseudonym) resides and works in the city of Miami (USA). The development of his artistic practice assumes various creation strategies, ranging from performance, video, installation, photography and creative encounters of a participatory nature. His proposals for creation are governed by a conception of artistic practice as participative social entrepreneurship, through a view that allows the confluence between the individual and collective, the public and the private.

In this sense, the issues that the artist works face critical dilemmas in the current political agenda: sexual diversity, the right to same-sex marriage, adoption, the roles of women in the contemporary world, gender violence, health, the right to have rights of excluded groups, the role of Hispanic minorities in the USA, including menopause and sexuality among others. Each of these topics are presented through small narratives articulated through the use of open codes: humor, kitsch, absurd scenes, the precarious POP, the ridiculous, each of these strategies assumed as forms of confrontation transforming the sense common and as a pedagogical experience to promote empathy and collective commitment.